Alexandria, Egypt – About 2000 years ago  Heron of Alexandria a.k.a. Hero was a great mathematician and mechanics inventor that was born around 10 AD.  Some historians say earlier and some say later.  Although it seems no one can agree exactly when Heron was born, the scientific community recognizes the important contributions this man has made to civilization or could have made if discovered sooner.

Heron describes in detail and through drawings many mechanical devices operated by air, water or steam pressure.  Most of these devices he actually constructed.  These include a steam turbine engine he called an aeolipile (Greek for wind ball), a toy jet propelled vehicle, automated dancing puppets, a steam powered fire engine, a water clock, heavy lifting machines, a coin operated vending machine, a pipe organ and a machine to automatically change scenery in the cities theatre.  One of Heron’s designs for a steam engine was discovered in 1668.  Heron’s designs may have served as inspiration to Thomas Savery who invented a steam engine in 1698 to pump water from mine shafts.  Later Thomas Watt invented the modern piston driven steam engine in 1765.

But back to automatic doors…….. Heron describes not one, but two different automatic door applications.  The first application used heat from a fire lit by the city’s temple priest.  After, a few hours  atmospheric pressure built up in a brass vessel causing it to pump water into adjacent holding containers.  These holding containers acted as weights, that through a series of ropes and pulleys would open the temple’s doors, at just about the time people were to arrive for prayer.  Heron used a similar application to open the gates to the city.

Hero described[12] the construction of the aeolipile (a version of which is known as Hero’s engine) which was a rocket-like reaction engine and the first-recorded steam engine (although Vitruvius mentioned the aeolipile in De Architectura some 100 years earlier than Hero). It was created almost two millennia before the industrial revolution. Another engine used air from a closed chamber heated by an altar fire to displace water from a sealed vessel; the water was collected and its weight, pulling on a rope, opened temple doors.[13] Some historians have conflated the two inventions to assert that the aeolipile was capable of useful work.[14] 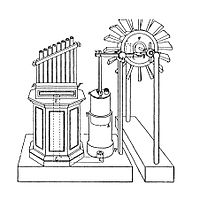 This pumped water into adjacent holding containers that acted as weights, enabling a series of ropes and pulleys to open the temple’s doors when people were arriving for prayer. He later implemented a similar application to open the City gates.

Heron’s automatic doors were among more than 80 mechanical appliances that he designed to work by water pressure, steam or air.

A foot sensor-activated automatic door was constructed in China in the 17th century, according to historian Joseph Needham in his 1986 book, Science and Civilization in China. Emperor Yang of Sui, who reigned from 604–618 had it installed for the royal library.

In 1910, author HG Wells refers to an automatic door in his book, When the Sleeper Wakes. It described how two men walked up to an “apparently solid wall” that “rolled up with a snap” to allow them access before it closed again.

Despite these early references, it wasn’t until 1954 that Americans Dee Horton and Lew Hewitt were credited with the invention of the first automatic doors as we know them today – after studying the difficulties faced by people trying to use swing doors in windy Corpus Christi, Texas. Using a mat actuator, the first automatic door was installed there in 1960. The first commercial automatic sliding doors appeared on the market the same year, establishing a new industry.

Throughout the 1960s, automatic sliding doors became progressively more common. Pneumatic-powered and with an emergency break-out feature and electric floor mat activation, their application became increasingly widespread in commercial buildings such as in large banks, hotels and various public buildings.

In the 1970s, motion detectors were invented to activate sliding doors, the concept of low-energy swing doors was introduced and the first access doors for disabled people were initiated. To coincide with the growth of the industry, the Builders’ Hardware Manufacturing Association was formed and the American National Standards Institute wrote the first standard for power-operated doors, ANSI A15610.

In the 1980s, active infrared presence sensors were introduced for safety reasons, while automatic revolving doors were launched and motion detector activation became an industry standard for sliding doors.

The first automatic folding doors were invented in the 1990s, when the automatic door industry became a global force. Active infrared sensors were soon used on all types of automatic doors.

Today, automatic doors can be found in just about every commercial building; opening as if by magic as we approach and closing efficiently behind us. Triggered by optic or motion sensors, this ensures that they open as soon as we approach them.

Modern technology can find ways of improving even the simple door! As part of our door installation survey our engineers can advise you on all the options and available and how well they may be applied to your specific property and requirement. To learn more, contact our team today and arrange for a consultation throughout Toronto. Tips for knowing the customer better

[ad_1] Four ASSA ABLOY employees reveal what they think is the best way to know the customer the better. Simon Ellis, President, ASSA ABLOY Pacific Region (Australia) “This is simple really, walk in with no preconceptions and ask questions. Understanding the customer business model is also critical – how do they generate revenue? Eva Karlsson, […]