On Thursday, the province released the names of 20 people who are tasked with coming up with standards for making education more accessible, and 19 people who will concentrate on making buildings and public spaces more accessible.

In Clayton Dauphinee’s opinion, the number of inaccessible public spaces is a major barrier.

Dauphinee has made it his personal mission to check for wheelchair accessibility in public washrooms.

Clayton Dauphinee measures a sink in a public washroom. (CBC)

While he doesn’t use a wheelchair, both his parents did. His father died three years ago and his mother still uses a wheelchair at 99.

Dauphinee used to take them both for daily drives around the Annapolis Valley.

He said he has documented about 150 washrooms, checking them with a measuring tape or taking a photograph to put in a file folder. Sometimes he brings his findings to the attention of the building owner, but he said it rarely changes anything.

The retired plumber has familiarized himself with the Nova Scotia building code and said he has never found a washroom that meets the code perfectly, even in newly renovated buildings.

He wants to see more training for building inspectors.

“Enforce what we have. It would be a nice start,” he said. 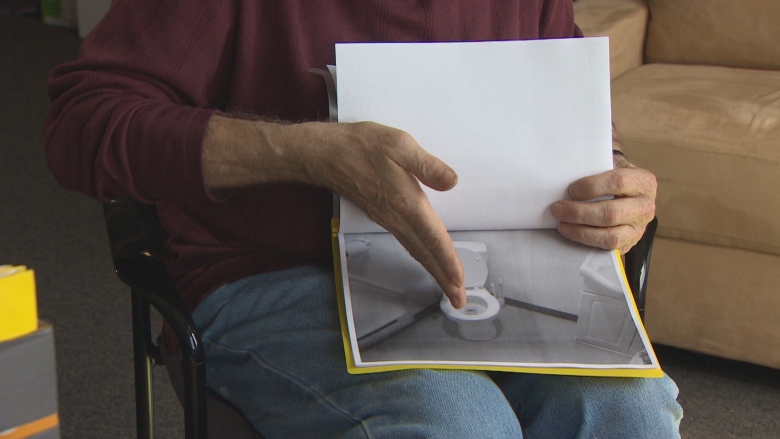 Clayton Dauphinee shows a photo he took of a washroom with a toilet positioned diagonally in relation to the walls. He says this would prevent someone in a wheelchair from lifting themselves onto the toilet. (CBC)

Justice Minister Mark Furey said enforcement does exist but mostly happens when someone files a complaint. He said his department also takes a “restorative” approach rather than the “hard hand of enforcement.”

“It is about education and a huge element in our ability to achieve our objectives by 2030 [is] to know that the people understand and are receptive to the necessary changes going forward,” he said.

Furey said people are more aware of the need for accessibility now, and the province has made grants available to community groups that want to upgrade public facilities.

Gus Reed, a wheelchair accessibility advocate, said he thinks there’s more attention being paid to the problem now. But he’s not convinced restorative justice is the way to go, and believes many people don’t see accessibility as having a public benefit.

“I think that there are still minds that need to be adjusted. You know, there [are] kind of echoes of the past and old-fashioned attitudes towards accessibility,” he said.

Gus Reed sits on the province’s Accessibility Advisory Board and is an advocate for wheelchair users’ rights.(Robert Short/CBC)

Dauphinee’s campaign to change minds did bring about one small fix.

At Larry’s Pharmacy in Berwick earlier this year, Dauphinee pointed out to pharmacist Zachary Morse the washroom door had a round knob that was difficult for people with less grip strength to open. That got Morse thinking.

“If you can’t get into a room it’s kind of useless,” he said. “A few patients came to mind that I know have those dexterity issues. … How many times have they been excluded from using different facilities?”

Morse went next door to a hardware store and bought a $10 lever-type doorknob. He installed it in about 15 minutes.

Zachary Morse, the pharmacist at Larry’s Pharmacy in Berwick, said it was easy to change a doorknob to make the pharmacy bathroom more accessible. (Submitted by Zachary Morse)

“We like to be as accessible as possible, that’s kind of a simple one to fix,” Morse said.

Dauphinee was pleased to see the doorknob change and points out as people age everyone will need fixes like that.

“How far away am I from being in their situation? Wouldn’t you like to know that there are things in place that would help you, should you be there?”

The people recently appointed to the province’s standards committees are expected to come up with the new rules by 2021. The standards will be implemented by 2022.